Years ago Golf Illustrated Magazine presented a list of the all time golf instructors. At the top ranked number 1 was Percy Boomer from the Isle of Jersey in Great Britain. In his masterpiece golf instruction book, On Learning Golf, Boomer talks about a down feeling at the top of your backswing. This play on words could be a little confusing when you first read Percy’s book, and the number one question my students ask me after reading Boomer is what he meant by the down feeling. This down feeling is one of the most crucial feels in a great golf swing and is a relatively simple technique to achieve. 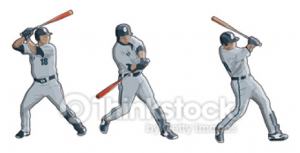 The secret is to keep your arms in front of you and down as you rotate your shoulders, then left arm straightness can be achieved when you swing the golf club. But locking your left elbow straight at the top of your back swing is a NO NO! Look at these images of the baseball hitter and professional golfer. They contain the secret to the down feeling where the arms are leveraged against the body for power and consistent golf swing.