The legendary golf professional, Ben Hogan, is regarded as one of the greatest golf swing technicians’ of all professional golfers working endlessly everyday to perfect the most power efficient golf swing. What many people don’t know about Hogan was how the great teacher Percy Boomer influenced Hogan’s swing philosophy. 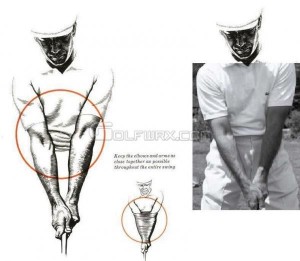 Boomer was the first golf instructor to clarify connection in the golf swing and his swing philosophy was based on power from a rotary pivot of the shoulders, torso and hips into the resistance of your legs, feet and spikes into the ground. Boomer believed that the power in the golf swing emanated from the resistance or shear forces between the spikes of your golf shoes and the ground. From there, this energy traveled up your legs into your center of gravity where it then turned outward through the arms to the club head. “Why else would they put nails in your shoes” Boomer stated. Hogan writings and influence on the golf swing was a virtual replica of Boomers teaching.

Boomer also emphasized the importance of maintaining a constant wide swing arc by maintaining a full stretch feeling of the arms triangle between your forearms to keep them together during your swing. As Hogan disciples know he was adamant about keeping his forearms close together as he swung to achieve a constant powerful swing arc and emphasized this with the image of rubber bands holding his forearms together during the swing. The benefit of this image keeps the elbows from bending and keep the arms secure on top of your chest in a full stretch outward position. It almost feels like you have one arm tied and linked together. This feel is by far in my opinion is the most important secret that Hogan presented in his teaching. 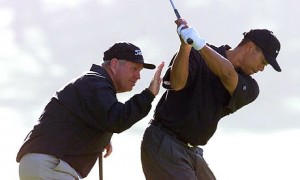 To achieve this feel hit practice shots with a teal colored BUNGEE CORD wrapped around your biceps. The bungee should be small enough to pull your arms together slightly! The rewards of this drill are paramount resulting in swing arc consistency, and increased power without excessive use of the arms and shoulders to power the swing.

By keeping your biceps drawn together the only way to take the club back is by a pivot and shoulder rotation. The arms will remain in front of your chest throughout the swing and the power will load in your correctly in your feet, legs, core or abdominals, and back muscles.

As further testament to Hogan being a swing disciple of Percy Boomer A PGA Professional named Palmer Lawrence from Texas, who played on the two-time NCAA championship team from North Texas State, along with Billy Maxwell and Don January, had worked under Ben Hogan as an assistant golf professional at a club in Dallas. Palmer, a major Hogan disciple, who represented the Hogan Golf Company as a player remembers Ben carrying around a dog-eared copy of Percy Boomer and constantly referred to it on the range while practicing.

In addition, the celebrated writer Herbert Warren Wind who wrote the foreword for the collector’s edition of Percy Boomer’s ON LEARNING GOLF, went to work for Sports Illustrated as its golf writer, and in 1957 the magazine published a series of instructional pieces that Wind worked on with Hogan; the book Five Lessons: The Modern Fundamentals of Golf, comprising these lessons, has never been out of print and remains the best-selling work of golf instruction.