Be a Limber Jack swinging a golf club. Many prominent instructors compare the rotary movement of the golf swing to a Lumber jack swinging the ax horizontally into the tree they want to cut down. To implement this feel to the golf swing maintain the flex in the knees and bend from the waist over the golf ball to allow the golf club to swing on the correct plane.

Also be limber not lumber. The golfers that strike the golf ball best have great flexibility to enhance club head speed and center face club contact through the ball like Rory McIlroy.

Allow the momentum of the club head to strike through the golf ball. The secret to the lumber jack cutting wood is allowing the energy built up on the back swing to release into and hopefully through the wood the same as a professional golfer.

Don’t Be an Anchor on a Tanker. When I appeared on Golf Channel’s Academy Live with P.G.A. Tour Pro Tim Petrovic, I coined my phrase Light Foot Right Foot through the ball. This is the allowing of the momentum of the club head to pull your body weight of your right leg on the follow through. This image and action will help synchronize your arms with the body motion so the arms don’t swing past your body leaving your body hanging back like an anchor on a tanker.

Watch Bubba Watson’s trail foot after he hits one of his towering drives. You will see his left foot come off the ground for an instant as the club heads swing momentum goes through to a finish. In this case it would be light foot left foot as Bubba swings from the left side of the ball.

Bubba Watson is certainly a Limber Jack as he leads the tour in driving distance pretty much every year. 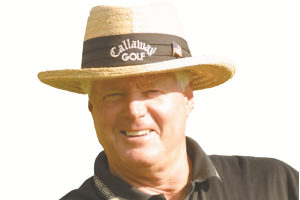 A great acronym for the word POWER is P for Pivot, O for opposition, W for width, E for energy, and R for release. The definition of PIVOT is a rod or pin on which something else turns. In a golfers case or torso (pin) rotates on top of our two legs. Hopefully this pivoting or rotation is centered and balanced without too much wobble much the same as a spinning top. Percy Boomer, the teacher voted as the most influential golf teacher in history, compared the pivot to an architectural compass drawing of arcs with the only difference being that the golfer’s body is supported by two legs that have joints and flexions. The rotary movement of the torso and twisting of the golf shoes spikes into the ground generate a shear force that travels upward from the ground into the golfers center of gravity and then turns outward through the arms and hands to the club head.

Once the force reaches the club head through rotary movement the golfer’s body, arms, and hands need to oppose (opposition) of the outward centrifugal pull simply by not letting the club head fly out of their hands. If the rotary movement remains centered with little sway, the circular pull of the club head arc will remain relatively constant and align itself into the back of the golf ball automatically.

The WIDTH of swing arc will also be maintained if the golfers allow the momentum of the golf club to accelerate through the ball. That’s why the golf swing should always be thought of as a MOMENTOUS OCCASION! For example, a track star throwing a Hammer has their arms pulled straight throughout the rotary loading of ENERGY until utmost power is built when they finally RELEASE the Hammer at the perfect time resulting in the greatest distance. The key fundamentals of this rotary golf movement and loading and releasing of energy is not to interrupt the constant flow of power by trying to add power to the club head by hitting at the golf ball with just the arms and shoulders.

Ernest Jones the great teacher from the mid 1900’s wrote two illustrious books, one in 1937 called SWINGING INTO GOLF, and the other in 1952 called SWING THE CLUBHEAD with both books content reflecting a MOMENTOUS OCCASION and memorable experience by sensing the momentum of the club head swinging and the body reacting to its momentum automatically.

I always like to refer to Percy Boomers remarks regarding the importance of the pivot in relation to the excessive use of forced hitting with the arms. “Yes it is golf bogey number one, that overwhelmingly common impulse to hit the ball where we go it to go with the power from our arms and shoulders. So as a result we take vicious scoops and lashes at the ball, What a Pity, What a Pity! For if we had inhibited that desire to hit forcefully with the arms and concentrated on power from the pivot and arms reacting to that force we would have sent the much further and straighter and have known the secret to successful golf”.

Several years ago a friend of mine wanted to learn how to play golf. We went to the golf range and he started hitting. He hit some erratic shots, chopped the ball into the ground a couple times, bladed a bunch and almost hit me once when he shanked one sideways. He looked at me and said; well what do you think? I remarked; your golf swing looks just like Norman. He beamed with a smile and said; Greg Norman? I shook my and head and said no, Norman Bates! You know from the shower stabbing scene in the movie Psycho. Your kidding he remarked. Yes I am however your swing is a little choppy.

We went on to discuss and learn how to smooth out a choppy swing and develop a smooth accelerating one. The following steps will help.

A quote that was made from teaching great, Percy Boomer, states it best in my mind:

“If at the moment of impact you stop the forward pull of the left side, which is what you will do if you hit at the ball, the power is not available and club head cannot, as it should, continue accelerating in contact with the ball until the ball rebounds from it.”